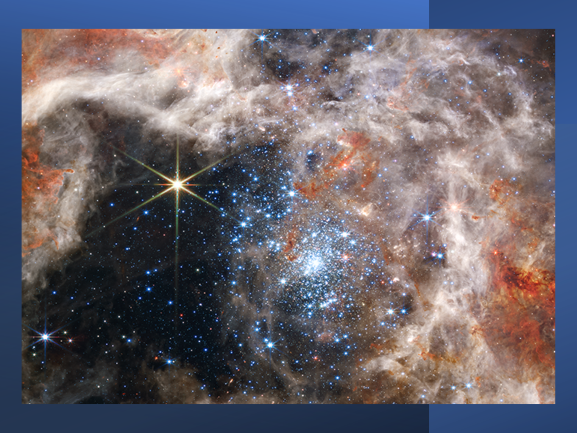 Free! Open to all!
Learn about the James Webb Space Telescope, its first science results, and its Data Management System. Delve into the questions Webb will help us answer:
Where could life form on planets? How are new stars created? When did the first galaxies turn on?

Rose Smith, manager of the Sommers-Bausch Observatory at CU Boulder, will provide opening remarks. Gretchen Greene, a data scientist at the National Institute of Standards and formerly with the Space Telescope Science Institute, will explain Webb’s Data Management System (DMS) and compare that system with the one used on the Hubble telescope. Dr. Greg Wirth, a Ball Aerospace systems engineer who assisted with commissioning the Webb’s optical systems, will share the observatory’s science results thus far and give a preview of what’s to come.

This program sponsored in part by the Boulder Public Library

Dr. Gregory Wirth is an astronomer and systems engineer at Boulder-based Ball Aerospace. He earned a Ph.D. in Astronomy & Astrophysics from the University of California, Santa Cruz, and worked at the W. M. Keck Observatory in Hawaii before coming to Boulder in 2014 to commission the National Ecological Observatory Network. Greg spent much of last winter at the Space Telescope Science Institute in Baltimore serving on the Wavefront Science Team responsible for commissioning NASA’s James Webb Space Telescope’s optical system.

Gretchen Greene is the Data Science Group Lead at the National Institute of Standards and Technology Office of Data and Informatics. Before joining NIST, she was the Chief Engineer for Data Management Systems at the Space Telescope Science Institute for multiple space missions. One of her key roles was to serve as mission team lead for the design and development of the JWST data systems. Working with the JWST mission was a fabulous opportunity and she’s excited to see along with you the wonders of its discovery!

Rose Smith is the manager of the Sommers-Bausch Observatory at CU Boulder. She earned her B.S. in Astrophysics at CU Boulder and worked for SBO during and after her degree. Rose worked as a systems engineer and staff astrophysicist at Software Bisque, a telescope company in Golden, CO. She was a volunteer observer in occultation campaigns supporting the New Horizons and Lucy NASA missions. She previously worked with SpaceX on Crew Dragon, NASA with CPAS (Orion Capsule parachute program), and Virgin Galactic.