All city buildings and facilities are closed to the public through April 19. All programs, services and outreach activities are canceled. More info. Stream content from our Online Library.

Please do NOT return any of your library materials. All materials are due April 30. 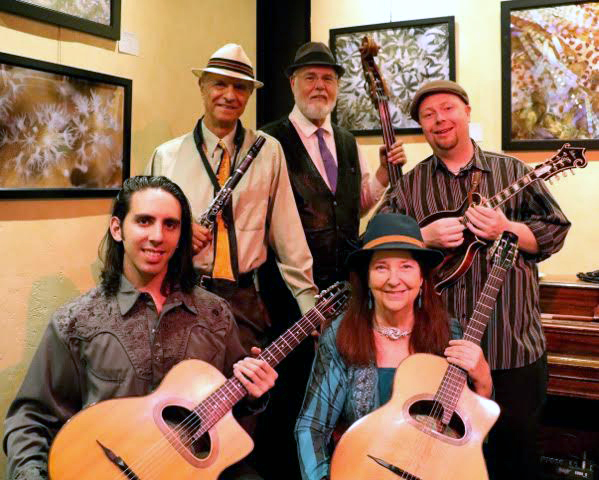 Gypsy jazz has captured the public's imagination for generations. It's Paris, 1945, and the legendary Django Reinhardt is regarded worldwide as the greatest guitar player ever. His virtuosity on guitar is matched by ‎Stéphane Grappelli on violin, and the pair form The Hot Club of Paris. In the Gypsy jazz tradition, many American swing tunes from the 40s and earlier became part of the repertoire.

Today, the Colorado-based band Espresso! merges these same two musical traditions with red-hot interpretations of American swing and Gypsy jazz favorites. The traditions of the past come alive with powerful instrumental leads and vocals in French and English. Very danceable, this music is infectious. "You owe it to your ears."

Espresso! includes an abundance of Colorado talent: Bill Pontarelli (clarinet), Jordan Ramsey (mandolin), Alexios Anest (lead guitar), Emily Reynolds (rhythm guitar), and Duane Webster (bass). Bill and Emily have performed Gypsy Jazz and American Swing for many years at venues in and around Boulder and Denver, Colorado. Jordan Ramsey came on board in 2010, greatly enriching the new group dynamic. Our own gypsy from Nebraska, Alexios Anest joined in 2017. Bassman Duane Webster has been putting it all together since 2016 to create our saucy swing sound.